It seems strange to me that my Droid Charge didn't come with a note taking application.  I've been sending myself text messages instead.  Here is a very quick comparison of 3 popular note taking apps across several devices.

I'll start with the most popular note taking application ever: the post-it note + a pen.  Prerequisite: knowing how to write.  Beyond that, learning curve = zero. 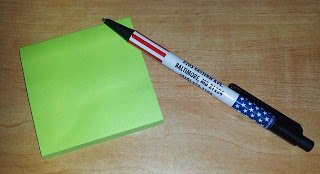 Now, lets see how that compares to the electronic versions... 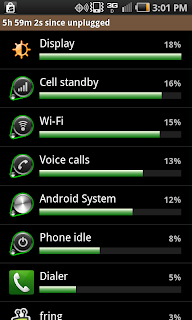 Android has a really cool, very detailed battery life indicator.  As a software engineer, I have no idea how it is even possible to do this, so I question the accuracy.  Charting CPU use is just not enough to really do this.

To see it, press the settings button then select Settings - About phone - Battery use.  Screenshot below:

This is a follow-up to Battery Life Problem: Part 1.

After uninstalling Fring and rebooting, the battery life today seems good... a little too good.  Take a look at this screen shot: 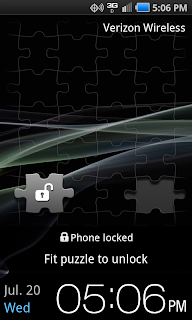 How is my battery at full power at 5pm?  So I look at the system status screen (Settings - About phone - System Status) and the discrepancy becomes clear: 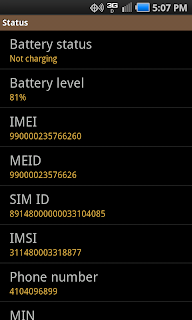 Aha!!  The battery indicator shows full, but the battery status screen shows 81%.  So the battery meter at the top is stuck.  A Google search reveals that I am not the only one to have this problem.  A forum post suggested I restart my phone, and while it didn't fix the problem immediately the next time I checked (15 minutes later perhaps?) the battery meter was working again.

Arrgh!  Another failure of the most simplistic functionality.  Ironically, I got the Droid Charge because the HTC Thunderbolt was considered "buggy."

I'll try reinstalling Fring and see if that is what killed the battery life.

Posted by New Android User at 11:09 PM No comments:

According to the nifty meter that tracks what is using battery life (how do they do that!?!?!?), the display was using 60% of it - even though it was locked the entire time.  Reducing the screen brightness was ineffective.  It just kept draining and draining.  Today, the phone made it to about 3pm and was at 18%.  This time it said WiFi was the culprit, despite not being in a WiFi area and not using the phone at all (up until the point that I noticed the battery issue).  I tried stopping applications, disabling WiFi and BlueTooth, but no good

I installed Fring about 3 days ago, and have not used it.  The phone claimed that Fring used 3% so that isn't the culprit either.  Assuming I trust the meter which I no longer do.

Lots of people have complained about battery life isssues, so this begins my search for the cause.  First two step: uninstall Fring, reboot the phone.  I'll update this entry as the experiment begins...
Posted by New Android User at 5:29 PM No comments:

Here is an example of some bloatware that came on my Samsung Droid Charge:

The calendar reminders are just wrong

I love the reminder options on my Android phone.  I would love them more if they worked.  My phone sends me reminders at seemingly random times.  Here is one example:

Take a look at some of the options for the Android browser. 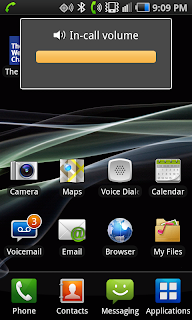 The phone only understands one call volume which applies to the earpiece, bluetooth, and speakerphone.  This is silly.  The iPhone remembers each of these volumes independently.  With my Android phone, every time I hit the Speakerphone button I have to crank the volume up, then crank it back down when I switch back.

I think even my old flip-phone supported this.

Posted by New Android User at 10:10 PM No comments:

Camera phones take pictures.  You should be able to view those pictures too.  For some reason this basic functionality is limited on my Samsung Droid Charge.  So far I found 2 photo viewers on the phone.  One good, one less good.

One problem with the Droid Charge is that it is too large to fit in women's pant pockets.  In general, men's jeans have deeper pockets.  The phone is large enough that my coworkers keep asking me about my new laptop, and if I need a bag to carry it around.

That's it: my next phone is going to be twice as big.

Posted by New Android User at 10:40 PM No comments:

2 of my favorite iPhone features are voice dialing and Google's voice search.  Android has taken voice recognition to a new level, although the voice dialing has a nearly fatal flaw.

One horrible misfeature of the iPhone is that the iPhone does not always show the date and time of text messages.  It seems like if the messages are close enough together it groups them as part of a conversation, and it only displays the time stamp of the first one.  This has been a problem for years and is a constant unaddressed complaint.

While this does save a bit of screen space, it is frustrating when someone replies with "I'm running behind, if you don't see me in 15 minutes just go ahead without me." and you didn't notice the message right away.  Apple deserves a smack-in-the-back-of-the-head for this one.

Fortunately, this is resolved on Android.  Every message shows the time stamp.  Comparison shots below. 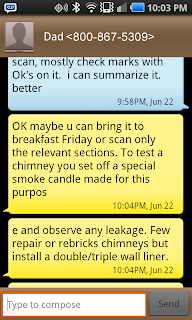 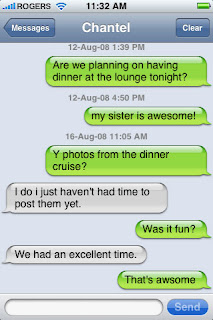 Posted by New Android User at 9:59 PM No comments: